I have no conflicts of interest to disclose. I have no association with the manufacturer or distributer of this technology

An effective treatment for painful peripheral neuropathy (PPN) will REGENERATE the nerves damaged by PPN, REDUCE the pain or discomfort significantly, RESTORE the function of patients and have no side effects.

Some experts claim that patients with PPN have irreversible nerve damage. (1) Although Dr Bril claims that “interventions aimed specifically at nerve regeneration may need to be employed,” (2) Dr. Malik has shown that “Current drugs have no benefit for the underlying nerve damage. We have witnessed failure after failure of clinical trials of disease modifying drugs.” (3)

One recent Meta-Analysis and Systematic Reviews concluded that the treatments for PPN are “inadequate”, (4) while another described the treatments as “frustrating … and maybe even appalling”.(5) The Cochrane Review sets the gold standard for treatment. They recently documented, in 6 studies of 1331 participants, that the use of 1,200 mg of gabapentin or higher, helped 38% of patients to reduce their pain by at least 50% as compared to the 23% of patients receiving placebo but had a 62% chance of creating side effects. (6) Clearly, our continued use of pharmacologic agents to treat PPN, while better than placebos, has not been very good.

Since using pharmaceuticals are at best ‘inadequate” what else can be done?

Einstein offered a solution when he stated: “we can’t solve problems using the same kind of thinking we used when we created them.” (7) His colleague, the Nobel Laureate Erwin Schrodinger taught us such a way of thinking:

The experimental results of Becker and Shelton stimulated Drs. Odell and Sorgnard to develop a technique called CET (Combined Electrochemical Treatments) (11,12,13), that has anecdotal support for its efficacy and became very widespread in its use. The use of CET has created a concept called “The New Three Rs to Treat Neuropathy: Regenerate, Reduce and Restore”TM which meets the definition of what an effective treatment for PPN should do.

METHOD: This study provides scientific facts to support the use of CET. Six consecutive patients received the use of CET and pre- and post-treatment ENFD (Epidermal Nerve Density ) biopsies. Pairing the objective measure of nerve regeneration with clinical outcomes gives quantitative data that verifies how using CET produces results that meet the definition of an effective treatment for PPN.

The six consecutive PPN patients had pain varying from a 4/10 to 9/10 in intensity and lasting from 6 months to 20 years. They received an average of 21.5 combined electrochemical treatments (CET) and were followed for an average of 26 months after their last treatment. Epidermal Nerve Fiber Density (ENFD) (14) biopsies were done at two different sites, before and on average six months after ending treatment. Visual Analog Pain scores, a Neuropathy Functioning Index (NFI) {similar to the Oswestry Disability Index (ODI) (15)} and medication use were recorded during the treatment, at the last treatment and on average 26 months after the last treatment. Following the precepts of Ambroise Pare (16) IRB approval for retrospective reviews is waived at my institution.

RESULTS: Six patients received an average of 21.5 CET treatments over a 6 to 12 week time period, and were followed for a total of 4 to 40 months after treatment (average of 26 months).

Five of these six patients regenerated their nerve fibers. They had, on average, a 100% ENFD increase in the number of nerve fibers per mm at one or more biopsy sites (2.77 to 5.54 nerves/mm).

From initiation to final treatment, these five patients reduced their average pain from 6.8 during treatment to a 1 at the end of treatment (85%) and to 0.7 (90%) when last seen on average 30 months after stopping their treatment. They improved their NFI by 67% at the end of treatment (57.2 to 18.6) and by 74% (57.2 to 14.6) when last seen. The one patient, who had no regrowth of his nerve fibers, still reduced his pain by 44% and improved his function by 34% but was lost to follow-up 4 months after finishing his treatment.

Of the 5 patients who were taking medication for their PPN before starting treatments, four stopped one or more of these medications.

No short or long term side effects were noted..

CONCLUSION: In this series, on average, 5 of 6 patients receiving CET regenerated their nerve density by 100%, reduced their pain scores by 90%, restored their function by 74% and had no side effects. These results demonstrate that an effective treatment for patients suffering from PPN exists today. As such they provide support for doing more rigorous prospective trials. 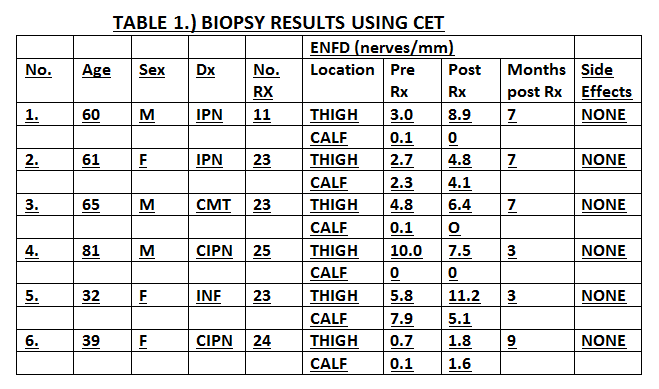